Have you ever watched a movie and said, “Well gosh darn–How do they know all the same dance moves? I wish that was real life!”

For me, that was real life on June 30th as over 400 of us took the “stage” at Pier 84 and performed a choreographed dance that we had learned via video and in rehearsal in just under four days. The event was sponsored by UrtheCast and put together by Flash Mob America. UrtheCast is using the flash mobs as a marketing tool for their earth camera. During the twelve minute flash mob, we formed a # symbol, an @ symbol, and an infinity symbol–before lastly spelling out I ❤ NY.

From the moment I arrived at rehearsal Saturday morning, I knew I had made a great decision for this week’s hobby. People were already waiting outside and they welcomed me with 3pm smiles–when it was only 8am. It was clear that we were all excited to be there, even if it was still four hours of rehearsal away.

I met people from Denmark, Australia, Spain, and Germany. I met people who never had done a flash mob before, and I met the professionals. I met people who were nervous about dancing, and I met people who spent hours watching over the videos so they could be the first ones onto the “stage” per say come Saturday. I met Moms, I met daughters, I met friends, I met boyfriends, I met Dads, I met women, I met men, I met children, I met a multitude of people who came together to bring joy to the lives of others. I met wonderful, amazing people who came together to bring joy to themselves. And I can tell you–it’s much more enjoyable to be a part of the dance than to watch it in the movies. Everyone should do a flash mob once in their life.

Stay tuned for the helicopter camera footage this Thursday from Urthecast.com 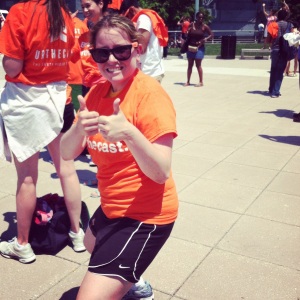 Stand up comedian, writer, filmmaker, and associate producer.
View all posts by libs012 »
← The Hobby Hoarder Overcomes a Fear: Stunt Jumping…Falling
The Hobby Hoarder Walks It Out: Stilt Walking →