While I still have a few videos to compile from the trip including hot air ballooning, snow shoeing and an end of trip flying lesson, I thought I would publish this short video clip and post.

Since returning to New York City, I’ve been on the go. I’ve been interviewing for jobs, I’ve been doing stand up, and I’ve been meeting more and more people. Let’s just say I’ve been getting back into the “swing” of things–especially with hobbies–and especially with THIS hobby.

This past Saturday, I headed out to the Hollywood Stunt School in Brooklyn where I had previously taken a high falls class and a trampoline class. However, rather than jump from a 20 foot platform or bounce around a bit, this time I took on the challenge of learning to rappel–which is defined as “the descent of a vertical surface, as a cliff or wall, by sliding down a belayed rope that is passed under one thigh and over the opposite shoulder or through a device that provides friction” (Dictionary.com). In simple terms–it means to scale the side of a wall or mountain–perhaps, like Spiderman.

I learned about the rappelling class when Bob, the owner, posted a photo of him hanging upside down on his Facebook wall.

“I want to do that!” I commented. A week later, Bob announced there was an upcoming class for rappelling. I couldn’t say no! “I want to be Spider-Libs,” I thought to myself, and so I contacted Bob via Facebook and signed myself up.

Before climbing up the ladder, our instructor told us that we would have to appear comfortable enough with the rope, on our first try, to be able to go upside down on a future try.

“I am going to go upside down,” I told my good friend Naomi, who joined me for the afternoon. “That’s why I wanted to do this…I totally am going upside down.” “I’ve rappelled down a rock climbing mountain before. I can totally do this.” My confidence bubbled as I tried to reassure myself that I was ready.

Minutes later, I was climbing to the platform we were to rappel from. And as I gripped each rung of the ladder, I suddenly realized that the last time I had rappelled down a mountain–someone was belaying for me—this time I was on my own. Suddenly the 15-20 feet from the ground felt like 60.

“Are you feeling scared, nervous, terrified at all?” My instructor asked me.

“What do you think is bringing on those nerves?”

“Just forgot what heights feel like…But I am good. I got this,” I said trying not to appear shaky. “We go down forward first. But I definitely will get to upside down…” I peeked over the edge… “I think.”

“I’m a tiny bit scared because it is a little higher up than I felt it would be. And I am scared because that’s what happens sometimes when we’re doing something we’ve never done before.”

“So you have respect for fear.”

I had never thought of it that way. But over the last year, I think that’s what I’ve learned to have respect for most. Fear is a driving force that allows us to reach our potential–that allows us to find out what we are truly capable of–that motivates us to do more–to be more.

“Why yes. I have a great respect for fear.” I declared.

And then I swung myself out to the wall and slowly made my way down—feet first. 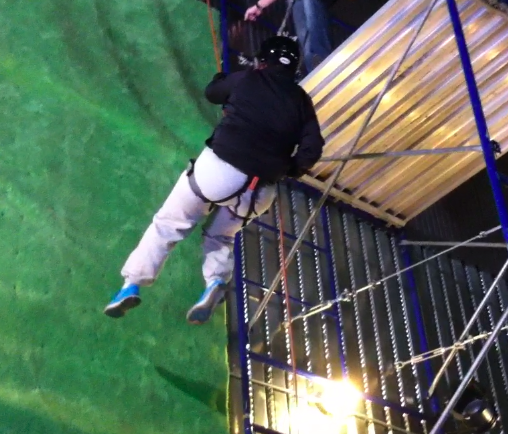 As I reached the ground, I heard the rest of the class cheering (we did this for each person who completed the task). It felt good. ‘I’m ready for round two,’ I thought to myself while I traded off my harness to the next person in line.

As we began our second rounds, Bob yelled up to the instructor to let some of the people go upside down. I watched as the first woman to try managed to put her body into the perfect inverted pirouette and effortless rappel in a straight line until she flipped back on to the ground.

I could feel my smile widening.

My turn. This time, I climbed up the ladder much more quickly. I listened to my instructor’s directions, shook off the small fears of falling out of my harness or flying into the ground head first, tightened my harness again, and then gave it a shot. Unlike the first girl to gracefully spin her web down the wall, I began literally spinning in circles. 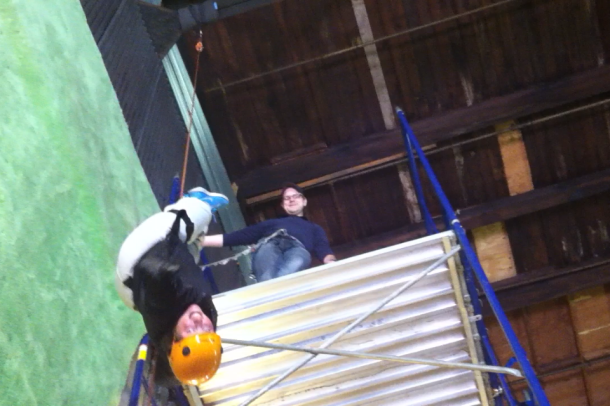 “Well this is interesting,” I said to myself, before safely making it back to my feet.

“How’d that feel?” asked one of the other works.

“Dizzzzzzying,” I said as I shook myself out of it. “But really, really awesome. I definitely gotta try it again.”

And so I did–this time much more gracefully.

You can look for me in the next Spiderman movie….

But you can look for me at the stunt school–I’ll definitely be going back.

Stand up comedian, writer, filmmaker, and associate producer.
View all posts by libs012 »
← The Art of the Travel Mate(s)
Landings →