Arches National Park wasn’t an original stop on our list–in fact, I hadn’t even known it existed. But as David and I reach the top of the mountain side which reveals one of the most beautiful natural arches of the world–I smile. I’m happy to be here. Hiking has always been therapeutic for me–even if I don’t always appear to be the most graceful one scaling the mountain. Something about the way the sun shines off the landscape–and the way the wind blows the dirt–or the leaves on the trees has always had a calming effect on me. Hiking often gives me time to reflect. 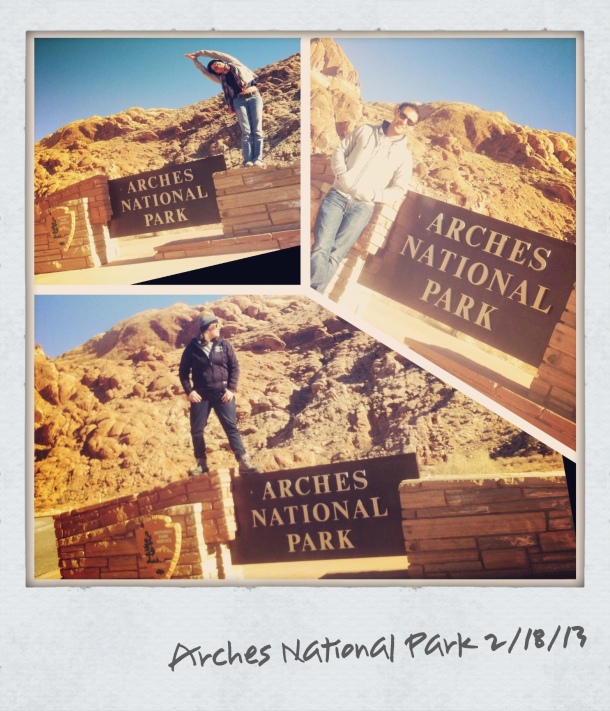 Snowmobiling had always been planned–but like climbing up a slippery side of a mountain, it also instilled a bit of fear in me. The last time I tried to tackle a ski mountain–it was on a down hill mountain bike–and I had crashed the bike. And the last time I had ridden on anything similar to a snowmobile was in the summer of 2006, when I went jet skiing for the first time. Despite having the opportunity to try and drive the jet ski, I declined and enjoyed the ride as a passenger the entire time.

This time was different. This time I would be taking the driver’s seat first. This time, for the most part, I would be in control and in charge for safely getting us up an 11,000 foot mountain in Colorado–and back down.  As I turn the key, I take a deep breath. I look at David, who is going to start out driving the other mobile, and he grins. He’s ready for a thrill. I ask Kim, who’s on my mobile, if she’s ready–and she is. Our tour guide takes off–I press the throttle with my thumb–and we are off.

Not before long, the sun is brightly shining off the snow, we’re soaring past trees, taking tight turns, and zooming up a valley of hills. The terrain changes from turn to turn going from a two lane snow-way to a narrow steep section bordered by giant trees whose arms seem to reach out to attempt and grab us at times.  And as we reach a clearing–it feels as if we could be flying–without wings attached. My nerves are gone–This is freaking awesome.

After a brief moment of making sure the tour group is all together, I ask Kim if she’d like to take the driver’s seat. We swap positions. But before we even make it around our first curve, we manage to drive the mobile through a three-foot wall of snow sending the snowmobile just feet away from toppling on top of us. Kim and I fall off the mobile and land in a pool of powder. Kim and I look at each other, David rushes over to us, and I begin to giggle. “You okay, Libs?” Kim asks.

I giggle again. “I’m good–but how do we get this snow mobile out of here?”

After a five minute dose of a 7 person effort to dig out a path for the snow mobile–we are back on track. And instead of being scared-I am excited to get back on. This mountain–this trek to the Continental Divide is meant to be conquered–much like the icey trek to the top of Arches National Park just a couple days later. 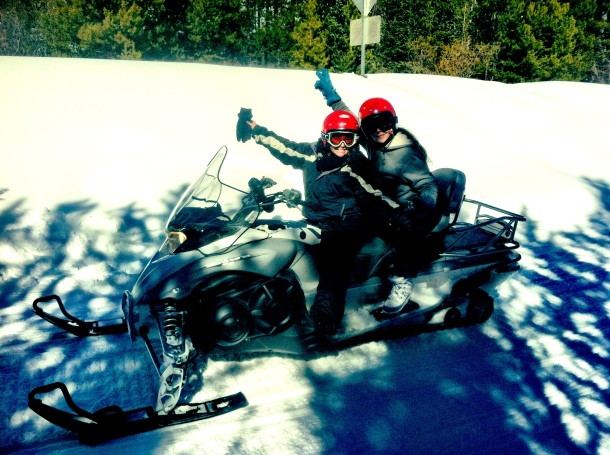 It’s now been just a few weeks since both the snowmobiling adventure and the Arches National Park Hike–and again I am having time to reflect as I snow shoe around the side of one of earth’s greatest natural wonders: Crater Lake Park. As I ungracefully hike–falling down once in a while, my friend Adam reminds me that “Fear is a habit.” And he’s right. Fear is only what we let it be and only how controlling we let it get.  Fear is unintentionally-intentional-it becomes a choice. If we let every fall scare us–if we choose to let fear over-ride our courage–then our ability to find out what we are truly capable of will always be fogged. And the earth and life is a lot more beautiful when we can see clearly. And I can safely say that I’m happy to be seeing life so clearly (even if it’s through my yellow sunglasses many of the times 😉  ).

Beneath, Above and Beyond

“The world as we know it is a remarkable place.” – Jason Mraz

Keeping up with the blog has proved to be much more difficult than I had anticipated on this trip. Each day is filled with a wealth of novel beauty that I never know where to begin when I sit down to write. It’s all a bit overwhelming and I find myself struggling to be able to put into words the awe that I experience each and each every day that I am waking up on this trip.  I mean, how do I fit the White Sands into a blog piece—when the next day I’m soaring over Albuquerque in a hot air balloon. How do I cut a video of snowmobiling when I am taking the time to witness a brilliant sunset?  Or how do I give the Arches National Park a fair share of blog space—when the next day we are off to the next adventure?

If there’s one thing I’ve learned over the last two week, it’s that beauty is everywhere we look—and that it doesn’t take very much to go and find it. Letting ourselves sit and enjoy it? Embrace it? Now that’s the hard part. But once we let ourselves do that? Whew. What a feeling. I’m glad I am letting myself do that–letting myself experience the world–our home as it exists–beneath, above, and beyond what we can ordinarily see–or let ourselves see

Over the course of two weeks, I’ve been reminded of this on a number of occasions—even if it wasn’t always underground. In fact—many of the experiences occurred above—and even beyond as we sledded down the slopes of the great White Sands: 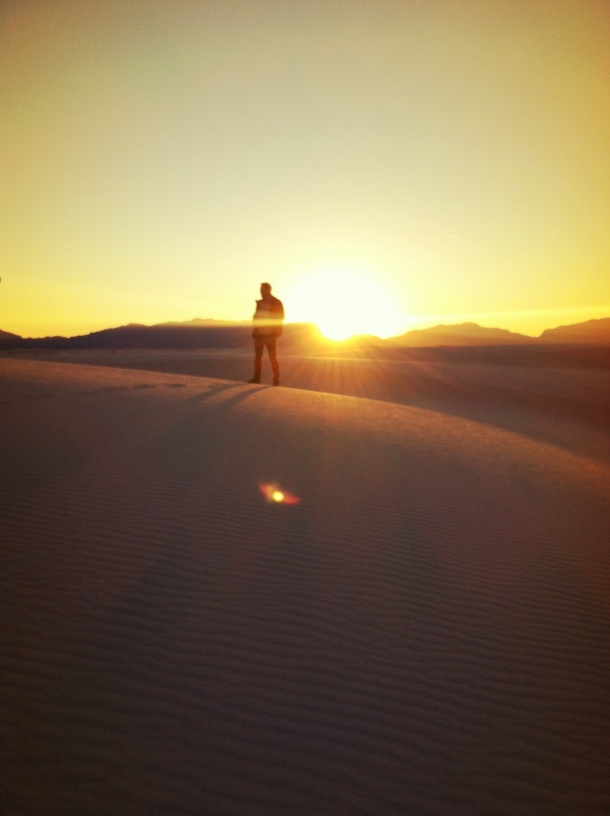 Danced ourselves silly in Danceyville, Tennessee on the side of the street: 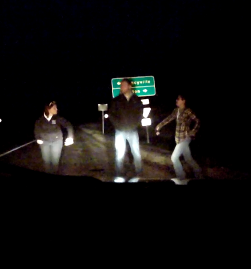 Floated in a hot air balloon above Albuquerque 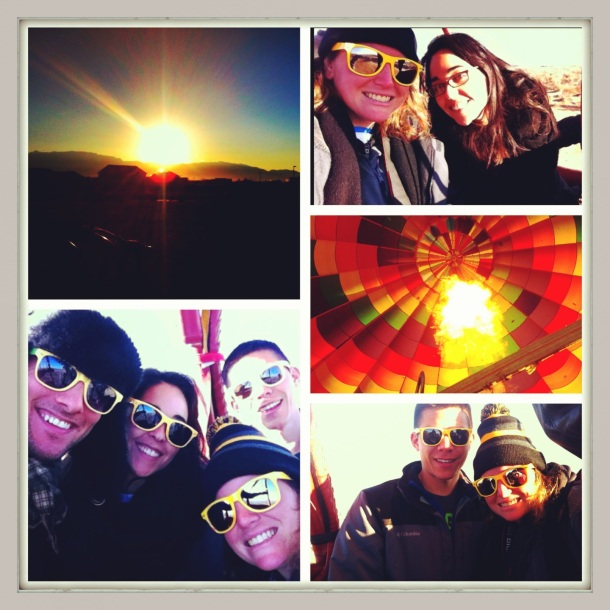 Shimmied our way up and down an icy path to a National Arch, laid under the stars at a remote location in New Mexico, hiked our way to The Wave in Coyote Buttes: 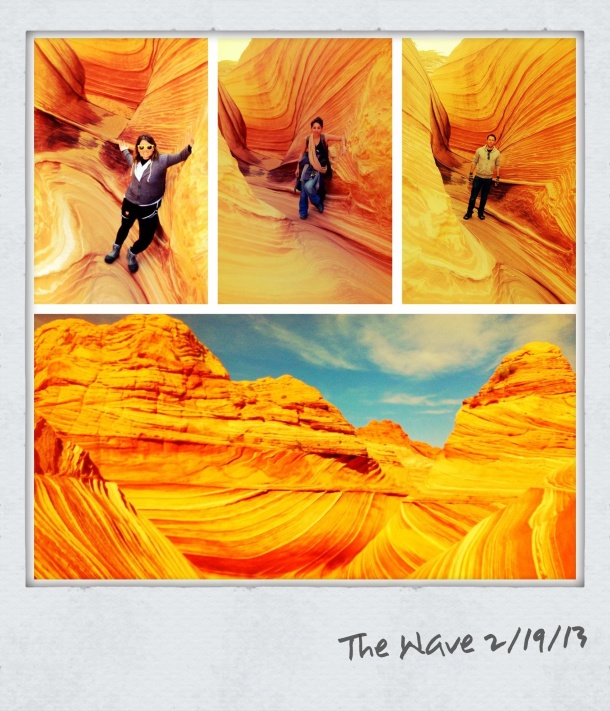 And took a gander at the Grand Canyon:

The road trip was meant to serve as a finale to the first Hobby Hoarder year—a celebration of sticking to a plan—and going through with it—and additionally a celebration of finding something to be passionate about, and scheduling time for it. It’s a celebration of making a choice–a choice to go on adventures– a choice to try something new– a choice to live life to it’s fullest–even when people or obstacles are challenging us not to.  What I’ve found is that the Road Trip, while it includes hobbies—has almost grown into it’s own project—but one that continues to fulfill a similar purpose as the The Hobby Hoarder year. 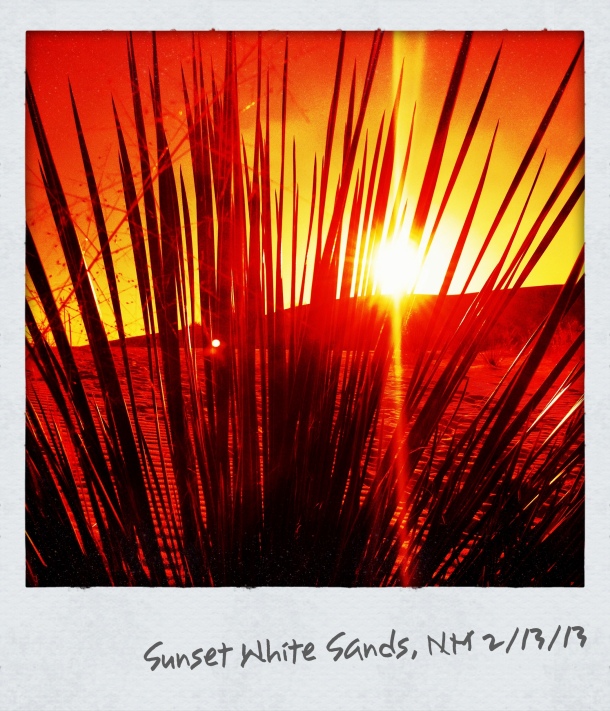 Both have been steady reminders that waking up each morning is worth it; that saying you are going to do something—and going through with it can be the most rewarding experience; and that each hobby—or activity you choose to do or place you choose to visit—has something to offer—something worth looking more closely at—something to share–Something that we can then go on to smile about–and share with others.

The exciting part is that this trip is not even half over yet—and the more I see—the more in awe I become. This world…it is a magical—beautiful place—filled with just an abundance of opportunities–and again, even before our apartments or our cities—it is our home.  And it feels good to be getting to know home—beneath, above and beyond.