Hobbies While on the Mend

Recently, I unexpectedly had surgery on my toe, which left me unable to physically run, dance, bike etc. Having to hobby without my foot seemed daunting at first, but then I turned to more calm, relaxing activities—activities that I didn’t need my foot for. Are you nursing an injury? Below, find seven hobbies to try while you’re on the mend!

1. Knitting – If you’ve injured a part of your lower body, cross-stitch a new pair of socks for when you’re back on your feet! 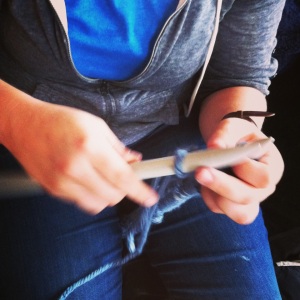 2. Painting/Drawing/Calligraphy –If your strong hand has been left unharmed, express yourself! All this requires is a canvas, piece of paper, or object that you can physically use paints, crayons, markers, pencils, etc  to create your vision on! And if your strong hand is injured—you could always try painting with your toes! What are you waiting for?

3. Ceramics/Pottery –Instead of moping and complaining about the cast that’s been molded to your foot or leg, use your hands to mold together your own original piece, pot, or bowl!

4.  Chess or other Brain Games – While you’re off your feet, stay on your toes by challenging your mind. Take on a friend in a game of chess, keep yourself occupied with a rubrix cube, or hit the Sudoku books! Even better, create your own crossword puzzle and then get your friends to test it out!

5. Ventriloquism and Puppeteering – Ever dreamed of creating the next big Muppet? While your one foot’s elevated in a boot, make use of your unworn socks and make your own puppet—or dummie! Then bring the inanimate object to life, by giving it a voice of it’s own.

5. Musical Instruments — While your arms are out of commission, stomp out a beat with a foot drum!

6. Meditation – While your body takes time to heal, find time to re-connect with your mind and soul.

Color Me Maybe: Running “The Happiest 5K on the Planet”

Every once in a while, it’s really nice to go back to old hobbies–hobbies I’ve hoarded, for life, in the past. Like old friends, they tend to welcome us back in with open arms when we let them.

I’ve been running races for just over three years now. In the spring of 2009, I ran my first 5k in Rhode Island, and just two months later, I ran my first half-marathon–which for a long period of time, I considered the proudest moment of my life. Since then, I’ve ran a number of 5ks, several 5 milers, a 4 miler, and a second half-marathon. Post second half-marathon, my legs yearned for a break. I went a month without running–and then another month. In June, I took my first run again–and still my legs said, “What do you think we are? Machines.” And thus began my longest hiatus from running, since my field hockey team was cut in college.

At this point, I had already signed up for the much anticipated Color Run. Nervous, I began to run three weeks before today’s run–to try and get back into 5k shape. I woke up early during my work trip, I ran, I walked for an extra work out, and today, on race day I woke up with an excitement that I knew very well beating in my chest. I threw on my white shirt, my white shirts, and slid on my bright new yellow socks:

If you could see my face at the same time as I took this photo-you would know that I totally had my game face on. While my friends and I made our trek out to Floyd Bennett Field and the Aviator Complex, I continued to spontaneously yell about how we were heading to the “Happiest 5k On the Planet.” And the truth was–we did end up at the happiest 5k on the planet. (Even the post color run patterns on my shirt said so!—Check out THAT smile on the back of my T)

As my friends and I made our way through the thousands of color runners, we stopped for free samples–happiness mingling–and special photos (which I am sure we will have a great laugh about later). When we reached the race track, I already felt a huge smile forming across my face–it could have been because “Call Me Maybe” was playing, but I have a feeling it was because I was surrounded by tens of thousands of people who signed up to have BRIGHT COLORS thrown at them in a city that tends to stick to it’s blacks and grays. I spotted neon sunglasses, much like my own (I went with the blues today instead of the yellows–for color stain reasons), neon socks, neon wristlets, neon shorts, neon everything. New York was already looking happier!

As our wave approached the starting line, I watched smiles turn to grins. It felt much different than many of the road races I’d done before, where everyone paced at the start line, worrying if their clip on their shoe to record their time was attached right. This was much more relaxed–much more anticipated–much more happy. We weren’t racing for medals–we were racing for bright yellows, pinks, greens, oranges, and blues. We were racing for happiness–and it was clear that, even in the early moments–we had won. As I ran and rolled through (YES ROLLED THROUGH) color stations, I felt life begin to feel a bit brighter–a bit more beautiful–a bit more happier.  (Just call me a hippie already 😉 ) But really–it truly was–the happiest 5k on the planet.

In the words of the Muppets: “Life’s a happy song–when there’s someone by my side to sing along”–or in this case: Run along. 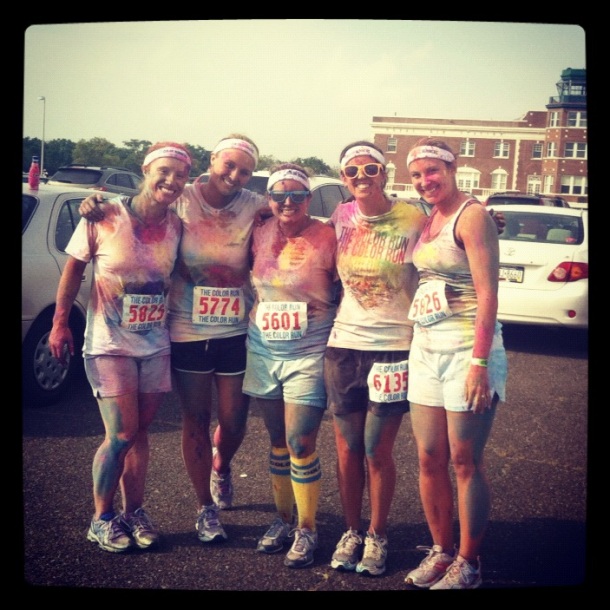 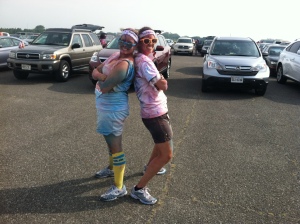 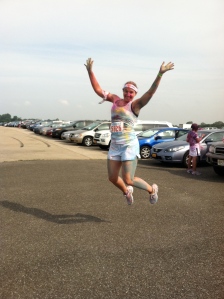 On another “Happiness” note, my good friend, fellow comic, and ventriloquism teacher April Brucker will be releasing her book this week entitled:

I came, I saw, I sang: Memoirs of a New York City Singing Telegram Girl

Join her fanpage HERE – and PURCHASE the book next week. I know I will!

An Update, a Thank You, & a Challenge

Thank you. Thank you for every pass-by, every read, every click, every motivating comment. Thank you for supporting me. I am happy to announce that on July 24th, I hit the halfway mark of my yearlong quest to become a professional amateur and completed my 26th NEW hobby (activity)—two weeks ahead of schedule. I guess you could say I’ve been on a Hobby High!

In New York City, it is extremely difficult to find a significant other who will stick around for much more than one or two dates—and with each of these significant others we learn something new about ourselves. On February 17, I began my one year love fest with activities—and what I’ve found now, one half of the way through the year, is that I am much more content “getting around” than I ever was standing still.

Since starting the Hobby Hoarder project, I have become more confident, more ambitious, and more versatile as a blogger, vlogger, writer, and speaker. In taking on so much, I have actually become even more focused than I ever was. I have become less judgmental of myself. I have stopped using the word can’t. I have developed new friendships with people who now join me on my adventures, want to document them, or really just want to hang out on the weekends. I have found that I am more open and willing to activities that I never imagined myself trying–like Jedi Light Saber training–or samurai sword fighting–or stunt jumping–or break-dancing—or pole dancing.  And for the first time since picking up a field hockey stick in 8th grade, I have felt passionate about something–and that’s what living life is all about–passion.  Most important, I’ve learned that my adventure is much bigger than ME just trying to do something new – it’s about inspiring others to do something new too.

And honestly, you’d be amazed at how much you can do when you try something new every week. You really become incapable–of being incapable. 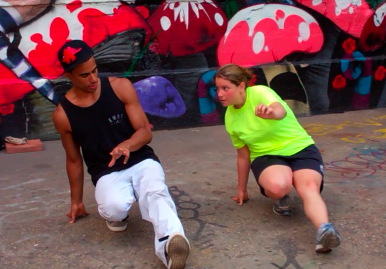 This year has taught me, thus far, that time is short but full of opportunity. So often, in the past, I found myself whispering “I want to do “that” some day” about a whole lot of “thats” and then never doing any of them. Now I am.

Additionally, this year, so far, has been about human interaction–meeting new people each week–hearing stories–spreading their stories–and building new relationships. I have found many times that the hobbies I am trying–are made that much more enjoyable because of the people I am meeting and spending time with. 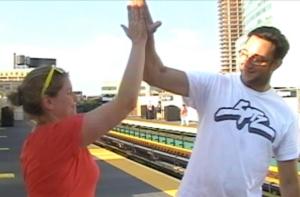 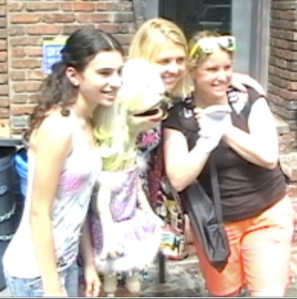 In the past I found myself following a routine of waking up, working out, going to work, eating, and going to bed. And then by the time the weekend would roll around–I didn’t want to do anything–but sit–and then complain about how I accomplished nothing all weekend. I don’t think I am the only one who’s done this–repeatedly. And who the heck decided that work days should be 9 to 5 anyway? Why is it that living has become such a rare hobby in itself?

Here’s where I call on you:

If you have a hobby—have tried something new—or are dying to do a new activity, reach out to me—send me a video—a blog post—photos—whatever, and I’ll feature YOU on the site. I want to know what OTHERS are doing. THAT’S what this is all about—pushing ourselves to try new things, take risks, and jump without knowing where we will land.

I challenge you to start your own quest–and try something new: Remember- we can fly anytime we want, because life’s accidental blessings will be there to catch us. Nothing like a bit of sweet serendipity. 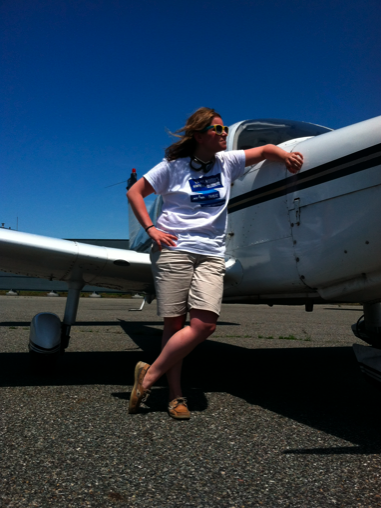